I had lived many lives inside this body.

I lived many lives before they put me in this body.

I will live many lives when they take me out of it.

The first time our mother came for us, We were three. We had spent the last few years believing our body – thinking that her mother was someone different. We thought our mother was Saachi, a thin Indian woman with rouged cheekbones and large bottle end glasses but we were wrong. Our father had prayed for a second child and Ala, the god answered. Our birth was the most stressful childbirth Saachi ever had. Trapped by this unfamiliar birthing, this abomination of the fleshy and this is how we ended up here.

We came from somewhere – everything does. When the transition is made from spirit to flesh, the gates are meant to be closed. It’s a kindness. Perhaps the gods forgot and since the gates were not closed against remembrance, we became confused. We were once old and newborn. We were her and yet not. We were not conscious but we were. When our mother came, she came as a snake when we were using the potty. She came as a large python curled on the tile across from the potty. First thing our body did was scream but the snake did not blink. Through its eyes Ala looked at us and through the Ada’s eyes we looked at her – all of us for the first time looking upon each other for the first time.

Even though we lay curled and inactive inside her, she could feel the unsettling our presence caused. The Ada kept having nightmares, terrifying dreams that drove her to her parent’s bed. We connected with our brothersister when we encountered masquerades. They recognized us. They called us to return but the Ada had real siblings.

They had gone to get salt when Anwuli, her sister ran into the road and was hit by a pickup. The brakes failed. It dragged her small body on the road smearing blood in burning trails. The Ada felt so guilty and avoided the hospital. “It was my job to protect her” Ada cried to Saachi. Saachi comforted her and Anwuli lived but with a big scar on her leg.

Things were not easy for Saachi.She became sick and was drowning in anxiety. Saul, her husband did not help. He was an impatient man. The children were always more Saachi’s than his. ” I can’t stay with you in this house! he told his panicking wife. “I have work to do. If you have mental illness, then you’ll just have to go to London.”

There are many ways of breaking a family and isolating a child – our brothersisters knew this. Saul cared more about custom plates, his benz, chieftancy titles than his family. “You may be a chief but you are not a god” Saachi wrote in a note she left for her husband as she took her children to Onitsha.

And this is how you break a child, you know. Step one, take the mother away.

As the Ada grew older, she encountered Yshuwa. She tried to pray to him. We knew his name. We knew he looked like everyone all at once at any time. His face could shift like a ghost. While he loved humans, like other gods, he loved them with a taste of suffering. He had no intentions of manifesting, so we made ourselves big for the Ada. She started cutting herself with shards of glass to feed us. Blood and belief, this is how the second madness began.

After she named us in that second birth, we felt even closer to the Ada. This is not normal for beings like us; our brothersisters have no affiliation to the bodies they pass through. The Ada should have been nothing more than a pawn, a construct of bone and blood and muscle, a weapon against her mother.

Our third birth happened in Virginia, after the Ada moved to America. The Ada was only sixteen and her new black American friends had helped apply relaxer to her thick and rich head of hair to straighten it. Two years later, Ada met a Serbian boy, Luka. Ada used to go to Luka’s house down the hill where her friends drank to prepare for the night out, rolling joints and snorting quick lines of coke. It was at Luka’s house the Ada met a Danish boy called Soren. By then, we were distinct in the Ada’s head. He cried a lot and was very protective. We were fascinated by how easily he slipped into his rages. None of it really touched us. 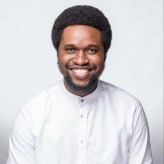 November Adventure with The Passport of Mallam Ilia

Dreams are for Losers - Shonda Rhimes